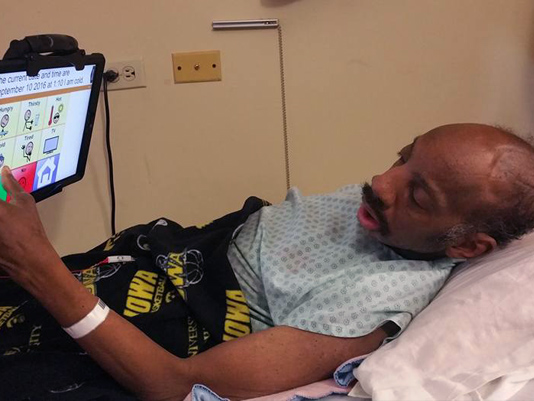 Former Hawkeye basketball star Kenny Arnold has spent years fighting health issues which have limited his ability to communicate and dampened his outlook on life.

After learning Arnold’s speech was impaired, Marty Gallagher (a lifelong fan) reached out because he wanted to help. Gallagher is the co-founder of Talk To Me Technologies, a company that specializes in providing communication technology. Kenny was given a speech device to help him communicate. It changed his outlook on life. Close friends say “Kenny is so lighthearted again. He’s back to being the Kenny who we all know and love.”

“The first day that Kenny had the Wego in his hands, he didn’t stop smiling,” said Henry. “He had something positive to focus on, instead of the pain, and he was very excited. Now, after he’s had the device for a month, Kenny’s whole attitude has changed. He’s in absolute heaven. He never stops working with it and making progress. Kenny is able to communicate better and he’s able to see the potential that exists with this device.”

Former University of Iowa basketball star Kenny Arnold has spent the last 30 years fighting health issues, including a brain tumor and several strokes, which have limited his mobility and ability to speak. His former teammates are quick to point out that Arnold’s positive attitude and upbeat personality have been crucial in his battles, but he began suffering from chronic hip pain last spring and his physical condition worsened. So did his outlook.

“I was really worried about him,” says Mike Henry, one of Arnold’s former Iowa teammates. “During those three or four months this spring and summer, Kenny was really depressed.” The 57-year old Arnold lives in a rehabilitation facility in Chicago. Henry lives in the Chicago area and checks in on Arnold two or three times per week.
Marty Gallagher, CEO of Talk To Me Technologies, read about Arnold’s situation and reached out to see if the Cedar Falls, Iowa-based company could help. Talk To Me Technologies is a manufacturer and distributor of speech devices, which help people communicate who have difficulty speaking.

“We serve a wide range of people,” says Gallagher. “We work a great deal with children who have autism, Down’s syndrome and cerebral palsy and adults with brain injuries, strokes and ALS, for example.”

Gallagher and Matthew Dunning, Chief Technology Officer of Talk To Me Technologies, drove to Chicago in late August to meet with Arnold and determine what their company could do for him.

After assessing Arnold’s abilities and needs, Talk To Me Technologies provided a Wego 10A speech device for the Hawkeye basketball legend. “Kenny is able to use a special stylus to press icons on the screen to speak messages, which help him communicate about pain, health concerns and basic needs with the staff at his facility,” says Dunning. “He can also access social messages that he can share with his friends and former teammates.” Arnold is also able to create his own unique messages, which he started doing the first day the Wego 10A was in his hands.

One month after receiving his speech device, Arnold’s upbeat attitude, outlook and personality have all returned, according to Henry. And incredibly, his pain has become more manageable, as well.

Henry adds that, during the summer months, Arnold would be in so much pain while lying in his bed that he would need to be re-positioned every 15 minutes. “But a few days after he received the Wego, I was there with him for three hours and he only needed to be re-positioned once during that time,” says Henry. “The Wego has completely turned him around mentally. Kenny is so lighthearted again. He’s back to being the Kenny who we all know and love.”

Talk To Me Technologies recently celebrated its 10th anniversary and the company has donated several devices this year as a way to give back, according to Gallagher. “When we heard about Kenny’s situation, we felt we could help,” says Gallagher. “He’s an incredibly strong and inspirational person, so we were proud and happy to work with him. Kenny is also surrounded by an amazing group of people, including several of his former teammates like Mike Henry, who have provided a tremendous amount of support for Kenny during the last 30 years. It’s a wonderful story.”

In 1980, Arnold led the Hawkeyes to the Final Four, the last time that Iowa has achieved this feat. Iowa lost its best player and All-American, Ronnie Lester, to a knee injury in December of that season, but Arnold stepped up and led the team in points and assists, despite playing with a broken thumb. Lester returned to the team at the end of the season and the Hawkeyes made their memorable post-season run. “Kenny was a great leader,” says former teammate Mark Gannon. “He was so dependable in clutch situations.”

In 1985, after his Iowa career was over, Arnold was working out and trying to catch on with a professional team when he was diagnosed with a brain tumor. “The doctors said, at that time, that Kenny had a 10 percent chance of surviving after that surgery,” says Henry. “Well, that was 31 years ago and Kenny keeps fighting.”

“I’m totally in awe of Kenny and what he’s done,” says Gannon. “His life is faith-based and he’s never felt sorry for himself. Instead, he’s made everybody around him stronger. He’s been very courageous.”

In the three decades following his brain surgery, Arnold has suffered from several strokes, which have further limited his physical abilities. He needs a wheelchair to get around now, for example, but Henry says that his friend maintained a positive attitude from his initial diagnosis in 1985 through this spring, when he took the downturn. “I think his frustrations with the hip pain and his inability to speak and communicate began to really wear on him,” says Henry.

But, with his new Wego 10A speech device, Arnold is able to express himself more freely, which helps alleviate some of those frustrations.

Now that Arnold is regaining the ability to communicate more effectively using his Wego 10A speech device, Henry has created a Facebook account for his friend, which has led many Hawkeye fans and former teammates to reach out to Arnold with messages, stories and memories. “It’s been absolutely amazing,” says Henry. “It’s been pretty emotional with all the responses that Kenny has gotten from people he hasn’t heard from in years. And he loves hearing from all the fans that he’s never had the opportunity to meet, too.”

“This keeps getting better and better with all the possibilities that the Wego opens up for Kenny,” says Henry. “When you stop and see the effect that this story and Kenny have on people, it is very cool. That is why we are trying to share Kenny’s story as much as possible, so it may inspire others to keep fighting … or for those who can help others to take action.”

Talk To Me Technologies is a manufacturer and distributor of speech-generating devices and related accessories, based in Cedar Falls, Iowa. The company, founded in 2006, is celebrating its 10th anniversary this year.

Link to Talk To Me Technologies