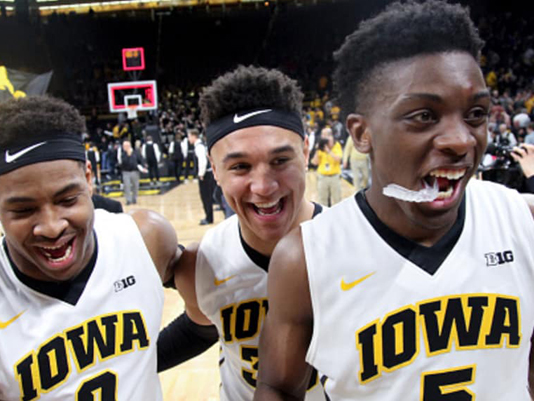 The Iowa men’s basketball team was sporting some new — and old — duds before taking on Northwestern at Welsh-Ryan Arena in Evanston, Ill., on Sunday.

Hawkeyes players showed off their new warm-ups, which pay homage to former Iowa basketball great Kenny Arnold. The warm-ups sport a No. 30 on the front, and the No. 30 and Arnold’s last name on the back.

Arnold was a part of the 1979-80 Iowa team which entered the NCAA Tournament unranked and seeded fifth, but made it to the Final Four before losing to second-ranked and eventual national champion Louisville in the semifinals. The Hawkeyes then lost to No. 20 Purdue in the third-place game. It remains Iowa’s last Final Four appearance.

Arnold played in all 33 games that 1979-80 season and averaged 13.5 points per game. He also who lives in the Chicagoland area, but was unable to attend the game Sunday. Arnold was diagnosed with a brain tumor in the mid-80s and now lives in a nursing home.

However, the gesture by the current Hawkeyes is no less classy.

Article by Land of 10
Chris Kwiecinski