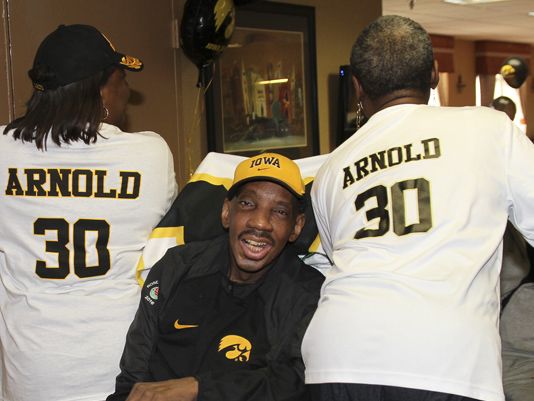 The University of Iowa long ago planned to make its home game with Illinois on Saturday a “white-out’’ game with fans being asked to wear white apparel.

But the friends and teammates of an old Hawkeye hero are seizing the opportunity to raise funds and awareness on his behalf.

Kenny Arnold, one of the stars of Iowa’s 1980 Final Four team, has spent most of the years since then battling a myriad of health problems, including a brain tumor and several strokes. He can no longer speak and is almost in constant pain, but some of his teammates are tirelessly speaking and acting for him.

They are selling white t-shirts with Arnold’s No. 30 and the words “Teammates For Life’’ on them, and they are hoping those are the shirts Iowa fans will wear for Saturday’s game. The shirts are $30 and are available online and at various locations, including the Black and Gold Shop in Davenport.

Iowa players also will wear the shirts during pregame warmups, just as they did during a Jan. 15 game at Northwestern.

“We think the idea of combining the ‘white-out’ game with Kenny’s shirts is a perfect way to show Kenny that he is not only remembered by Hawkeye fans, but that we are all so proud of him for the courage and strength he shows every day,” former teammate Vince Brookins said. “We know the passion of Iowa fans and we know they will step up in this effort for Kenny.”

Brookins is one of the leaders of the campaign, along with former teammate Mike “Tree’’ Henry and Iowa fan Marty Gallagher.

“Kenny has always been a tremendous leader,” Henry said. “At the time of his initial diagnosis, the doctors gave him a 10-percent chance of surviving. Well, that was almost 32 years ago and Kenny keeps fighting.

“All of his former teammates, friends and fans are so inspired by how he has lived his life, we want to do something really special to honor Kenny and help motivate people out there who are facing similar battles.”

Although All-American guard Ronnie Lester was the marquee player on the Final Four team, Arnold stepped up and played a key role when Lester went down with a knee injury. The Chicago native ended up leading the team in both points and assists as Lute Olson’s team reached the national semifinals before losing to eventual champion Louisville.

Arnold is unable to travel but many of the players from the 1980 team will be involved in several ways on Saturday. They will be available, along with other Iowa greats of the past, on the main concourse at Carver-Hawkeye Arena to sign autographs and visit with fans from 11:30 a.m. to 12:30 p.m. In addition to Brookins, Henry and Lester, Bobby Hansen, Mark Gannon, Steve Waite, Waymond King, Greg Stokes, Jess Settles, Craig Anderson and Todd Berkenpas are expected to be on hand.

Those players also will host a “meet and greet’’ with fans following the game from 4 to 8 p.m. at the University Athletic Club. The event has a suggested donation of $10 per person and $20 per family with all proceeds going to the Kenny Arnold Fund.

“We look forward to visiting with everyone we meet that day,’’ Henry said. “Kenny is such an inspiration so we want to share his story and inspire others to keep fighting, as well as motivate those who can help others to take action.”