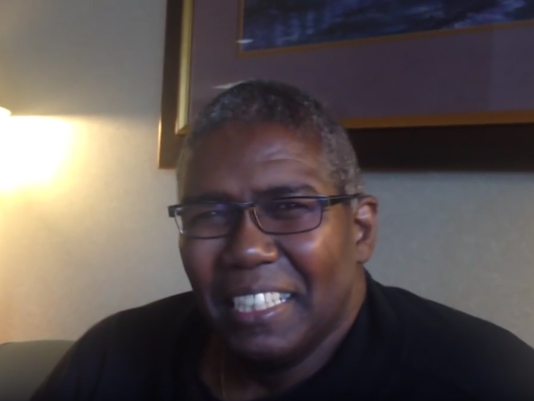 Mike “Tree” Henry and Kenny Arnold have been inseparable ever since they were teammates on the Iowa basketball team.

Arnold was a standout for the Black and Gold from 1979-1982, scoring 1,112 points and dishing out 352 assists during his playing career. He played a pivotal role in helping Iowa reach the Final Four in 1980, and was also a member of the last Hawkeye squad to win the Big Ten Conference title.

He has been through a lot since their Hawkeye playing days, and through it all Henry has remained by his side.

Arnold has spent the last 30 years fighting health issues, including a brain tumor and several strokes, which have limited his mobility, robbed him of his ability to speak and left him in a state of chronic pain.

All that said, the former Hawkeye has remained incredibly positive.

Henry (pictured, far right) is part of a group of former Hawkeyes leading a grassroots effort to honor Arnold at Iowa’s Feb. 18 home game against Illinois. The goal is to have as many fans wearing Arnold’s “Teammates for Life” shirts to show support for the former Hawkeye and the strength and courage he has shown battling his health issues over the last 32 years.

Henry spoke with HawkeyeNation.com about the upcoming “White Out” game, and reflected on the friendship he’s had with Arnold over the years.

When did you first meet Kenny Arnold?

Tree Henry: I remember meeting him at an Iowa basketball camp going into my senior year of high school. When I got to Iowa I was a year ahead of him and he came up for a visit and I hosted him. We had similar personalities and something clicked. After he committed to Iowa we were inseparable.

We liked a lot of the same things and that has continued over the years. When he got sick I wanted to do everything I could to help him. He’s gone through some difficult times but he trusts me to be there for him and do what he needs. Because of our friendship I feel honored to be able to be there for him.

A lot of people say he’s lucky to have me, but the feeling is mutual. I’ve learned so much from him about being strong and having the will to live. I want to share what I’ve learned with other people and help others going through difficult situations.

For some of the younger Hawkeye fans out there that weren’t around to see Arnold play, tell me how you would describe Kenny Arnold on the court.

TH: His style of play was just smooth. He was a guy that did more than what it appeared he was doing. Ronnie Lester got a lot of the attention, but Kenny did the subtle things. He was a reliable passer, defender and scorer — one of the toughest guys I know. When Ronnie got hurt in 1980, Kenny stepped in and ran the team. He did whatever it took to win. Even when he had a broken thumb, he kept playing and never complained. Not too long ago we pulled up an old game on YouTube and we were in awe. You almost forget how good he was. Kenny is one of the all-time greats at Iowa. It’s an impressive list but I think he sometimes gets overlooked because he was the ultimate team player.

Tell me about the “Teammates for Life” shirts.

TH: The shirts came about as a way to help Kenny out. Originally we weren’t planning on selling the shirts, but I put a picture of the shirt on Facebook and by the time I got home I had close to 100 hits messages from fans wanting to buy it. We thought it could be a nice fundraiser to help.

He couldn’t believe it when the players wore his shirts at Northwestern. Having that kind of support all these years later means so much. I read him Facebook posts, emails and texts I get. That’s what keeps him going day-to-day.

What is going to mean to Kenny to see Iowa fans wearing the “Teammates for Life” shirts at Carver-Hawkeye Arena on Feb. 18 for the “White Out” game?

TH: It will mean the world to him. Iowa has the best fan base in the world because the fans always support us on and off the court. One of the last times we went out to Iowa City he got a tremendous hand from the fans and it blew him away.

I already have goose bumps thinking about seeing the fans at Carver wearing the shirts. It’s a tremendous tribute to Kenny and we’re hoping to see the place packed with No. 30 shirts.

The staff at the nursing home is going to have a watch party and the staff is going to be wearing the shirts. I wish I could be in both places at once to see the look on his face.

This will keep Kenny going for quite a while. This is the best medicine he could possibly get. I’m happy to be a part of it and see all the guys hop on board. We’re always looking for an excuse to get back to Iowa City, and the chance to give back to the fans and do it in Kenny’s name will be the best.